Finally, Someone’s Made a Set of Truly Smart Headphones

This blog was founded on the belief that the technology delivered via modern smartphones and smart connection types would spark a revolution in what is otherwise known as a backward facing industry: headphones.

Sure, there have been cool designs, cool colors and hey, Bluetooth has gotten a bit better, but for the most part, headphones have been sitting on their haunches of the years, sticking with the old formula of 3.5mm analog plug, cord, neodymium drivers, you get the picture.

>See how the Rayz Plus stack up against other lightning headphones.

With the iPhone 7 Apple killed off the 3.5mm headphone port, to the dismay of many. Although anger about the move still simmers, and conspiracies, perhaps rightly so, still persist that it was a giant revenue ploy by Apple to get people to buy more dongles.

Conspiracy or not, the move to lightning-only has definitely had one major positive impact; the forced evolution of headphone makers to embrace “smart headphones”.  Pioneer has shown us what this glorious “smart” future looks like.. 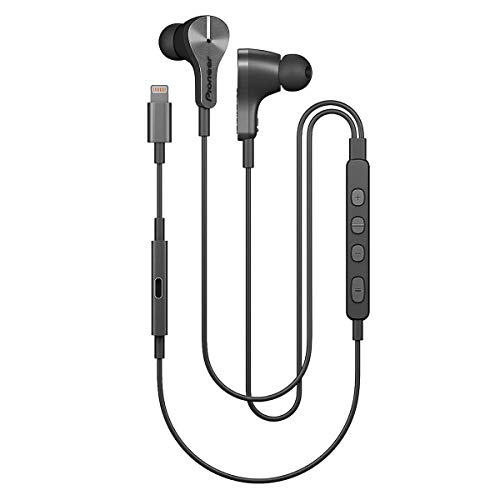 What Are “Smart” Headphones?

Smart headphones are connected headphones that utilize new tech to bring you new and innovative features not possible with traditional, analog headphone types.

This includes integrating DAC and amps directly in the headphones like Audeze does with their Sine headphones and CIPHER lightning cable. It includes the Scosche lightning adapter for Bose headphones.

It also includes things like dedicated equalizer apps so users can fine tune their music directly and digitally on their smartphones.

Additionally, some smart headphones feature active noise cancelling without the need of external battery packs, and of course, process calls with built in microphones. The future for smart headphones is really endless as other tech like gyroscopes and GPS can be integrated to make them truly smartphones for the ears, navigating users from place to place all the while soothing them in the highest fidelity music they’ve ever had the privilege to hear while on the move.

Ever since the dropping of the headphone jack forced makers to embrace lightning connector types, the evolution of smart headphones has progresses slowly, with new model after new model featuring one or two cool features.

Now though with the Rayz Plus, Pioneer has jumped onto the scene with perhaps the most advanced smart headphones to date.

Let’s face it, dongles suck. Not only are they over priced, but they are bulky, are easily lost, and look ugly as all f*ck. It’s no secret this website and it’s editors absolutely HATE dongles.

We also aren’t big fans of Bluetooth which Apple is seemingly trying to shove down everyones throats.

Sure, it is useful for a specific type of user, and can be made “smart” as well like Libratone did with their smart Q Adapt on-ears, but the real excitement lays in lightning cable tech. (Libratone also makes a pair of smart cabled lightning earbuds as well which we’d take any day over the on-ears.)

That’s why huge names like Shure are making lighting cable options for their headphones, and companies are making their flagship audiophile-quality headsets lightning cable connected and NOT bluetooth, like the Bowers & Wilkins P9 Signature.

So, by making a lightning cable set of smart earbuds, Pioneer is joining a truly elite, forward thinking network of audio enthusiasts not afraid to embrace tech in it’s “cabled” form.

The Rayz Plus are cabled and end with a lightning connector. Many people have griped about the lightning-only iPhone as a hassle because they can’t charge their phones while listening to music.

We’ve discussed before there are actually a few solid options for charging your phone and listening to your music simultaneously, but we admit, they aren’t the most seamless of solutions. Well, hold onto your pants, because what Pioneer has done with their Rayz Plus will blow you away..

Listen and Charge at the Same Time

So, instead of just making a pair of lightning connected headphones with solid sound quality like so many before them, Pioneer actually pushed the envelop even further and addressed the ugly dongle issue we mentioned previously be integrating a lightning port (female end) into the earbud’s cord.

This means that music lovers can simultaneously listen to their favorite tracks and charge their smartphone at the same time, without a dock, dongle or any other cumbersome contraption! This is truly an industry first.. the combination of hifi lightning cable headphones that allow for phone charging without disrupting the listening experience.

Nobody else is doing this! Bravo Pioneer for not just settling for a pair of cool lightning earbuds and instead choosing to set new standards in terms of usability. Bravo indeed.

Besides just being awesome for allowing you to charge your phone and listen to music (hello Apple, why with all your billions couldn’t you figure out something like this?) the Rayz Plus also sport some very innovative “smart” features not found in regular 3.5mm cabled headphones or even in most new Bluetooth headsets either.

The Rayz Plus have a built in microphone and controls on the cable, and also include an extra button that can be programmed to command custom tasks via an app on your phone. The Rayz Plus have a total of 6 built in microphones to help make phone calls seamless and also work with the active noise cancellation that is built into the units, making them great for frequent flyers or just people working in noisy cafes or offices.

The Rayz Plus also feature an intelligent ability to stop music when they are removed from your ears.

Yes, similar to Airpods (read here for our honest opinion on Airpods), the Rayz Plus will know when they’re in your ears and play the music when inserted, and pause it when they are removed.

This is great for people who have to regularly stop their listening to talk to others, or just take care of business without music distracting them.

The drivers themselves are nothing short of the high quality you would expect from Pioneer, which is perhaps most known for making high end DJ equipment used by stars the world over.

The driver units themselves are 9.2mm  large and produce responses from 10Hz all the way up to 22,000Hz at a full hi-res digital bitrate of 24bits or 48kHz. Music from your iPhone has never sounded so good.

The Rayz Plus come with a dedicated companion app from Pioneer that can be downloaded directly from the App Store and allows for personalization of many functions of the Rayz.

For example, you can fine tune the EQ to get just the right sound you’re looking for, you can program the smart button on the in-line controls to perform a specific task for you,like launching Siri for example, and it also allows you to “continually improve with the delivery of new features (to your earbuds) via the software update interface”, according to Pioneer. The active noise cancellation works with the app to enable a “Hearthru” mode as well that filters out annoying noises like regular noise cancelling, but still allows some noises through.

This function is perfect for using the Rayz while joggin in a city for example, so that you can enjoy your music but still hear a car horn or ambulance if it came near.

Likewise, it will allow you to enjoy your music in a loud office but you’ll still be able to hear of someone shouts your name. Then, when you pull them out of your ears they’ll automatically pause your music!

You might expect such “smart” little buggers to be a major draw on your phones battery. And while yes, functions like active noise cancellation will use more battery, it’s more of a trade off as alternatives also require bulky lithium ion batteries or replaceable batteries.

Additionally, Pioneer has addressed power consumption by integrating their own Avnera Lightx technology.

What is Lightx technology you may ask? Well, it’s the utilization of ultra low power consumption analog system-on-chips, or ASoC for short.

All you need to know is that while these bad boys are smart, they’re also smart about their power consumption to help you get the most out of your iPhone’s battery life when you’re not able to charge.

Overall these earbuds are impressive as hell, from the unique dual charging function, to the beautiful app, to the low power consumption considerations.

These are without a doubt the most technologically advanced earbuds currently on the market for Apple users and for that reason they deserver a huge round of applause.

Rayz Plus are now available on Amazon and are receiving stellar feedback from users in the review section.

If you are a Rays user we’d love to hear from you! Please let us know in the comments below, or if you’d be willing, do a quick writeup for us on your experience, we’d be happy to publish!