Throw Away Your Adapter and Power Bank and Get This Instead

Unfortunately, there has yet to be a massive release of Lightning equipped high-end audio headsets to compliment the all-Lightning iPhone 7.

So far, music aficionados have pretty much just the Philips Fidelio, Audeze EL-8 Titanium and Audeze Sine to choose from in terms of anything that comes close to audiophile quality. If none of those suit your fancy or you’re just sitting back waiting for something else to come along, but don’t know what to do with the high-end 3.5mm tipped headphones you have laying around maybe you should consider an adapter.

What?! Apple includes an adapter when you buy a new iPhone and it’s shit. Why would I want to spend more money on an adapter made by a third party? Well, what if we told you that being an adapter is the LEAST of what makes the Oppo HA-2SE a handsome addition to any budding audiophiles digital-to-analog setup.

Oppo has been making high-end amplifiers and DAC (digital-to-analog converters) for years, and their HA-2 is one of the most widely respected amplifiers in the audiophile kingdom, because of the high quality components it includes and the stylish build quality.

But don’t take our word for it, scroll through their almost endless “awards” page to see recommendations from pretty much every respectable audiophile and component publication on the web. Oppo has recently updated the HA-2 and called it the HA-2SE. The HA-2SE is very similar to the classic in that it retains it’s professional matte aluminum and leather design factor, however the internals have been completely upgraded to included to top of the line components. What does all that techno mumbo-jumbo mean? It means this little amplifier and DAC will make your music sound like you’re hearing it for the first time.

Lows are lower than ever, highs are clearer than ever and the whole listening experience is brought to a level that will blow your mind if you’re used to listening to your music through crappy stock earbuds. 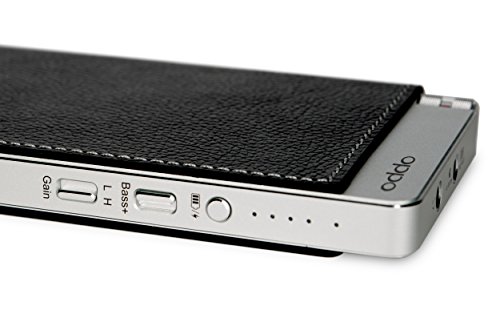 Which reminds us, the Oppo HA-2SE is only a smart idea for someone with professional quality headphones. If you pair it with crappy headphones it won’t do anything because it will be limited by the components in the headphones themselves.

Besides being one of the best AMP/DAC’s on the market, this little bit of Jame Bond gadgetry also can serve as an external power bank, charging your phone while also improving your overall listening experience.

The battery is huge (3,000 mAh lithium polymer) and can be recharged in as little as 30 minutes.

The coolest thing about this whole setup is it can be charged via USB-to-Lightning cables, making it iPhone 7 friendly! Since it has analog 3.5mm output jacks, you can also use it as an adapter for your iPhone 7.

Charge the amp with a Lightning connector while simultaneously enjoying your music via your old trusty 3.5mm jack headphones.

Ultimately, then the Oppo HA-2SE is kind of like a swiss army knife for people who demand the most from their music but also travel/move around a lot and aren’t impressed by the current selection of Lightning-cabled headphones.

The price to this convenient club of audiophile caliber audio bliss is only $299, WHICH, when you consider how it kills three birds with one stone while also being one of the best Amplifier/DAC’s on the market, it’s actually kind of a bargain, ESPECIALLY if you spent more than $299 on your current high end headphones in the first place!

So any iPhone 7 owners out there that want top notch audio and convenience, look no further, seriously, you won’t find anything nearly as handsome as this.