If you answered “yes” to any of these questions, then the Dragonfly USB DAC might be just the thing for you.

Lightning Cans is dedicated to the pursuit of a purer audio experience for people who use Apple devices.

While most of our attention is focused on actual headphone solutions, that is audiophile-quality headphones with built-in lightning cables, we are also avid Apple laptop users. Go ahead, call us “fanboys”, we’re used to it… sticks and stones may break our bones… If you work remote or spend a lot of time in coffee shops you may prefer to listen to your music directly from your laptop as opposed to using your smartphone.

Just a few of the benefits of listening to music from a laptop vs. smartphone include:

So the benefits of running your audio directly from your laptop our numerous. The only legitimate problem is the audio quality is usually pretty garbage. That’s where the Dragonfly USB DACs come into the picture.. Originally launched in 2012, the Dragonflies help turn standard compressed audio into much cleaner, clearer, more naturally beautiful sound to be enjoyed via a quality set of cans.

Dragonfly Black vs. Dragonfly Red vs. FiiO i1 – What’s The Difference?

The dragonfly comes in two main model types, the Red version and the Black version.

The primary difference between the two is the Black version is designed for headphones that don’t require higher voltages to run, that is, headphones that run off 1.2 volts or less. The Dragonfly Black also allows for analog volume control only.

The Dragonfly Red on the other hand can run almost any headphone type, including the power hungry models popular with bass heads.

Otherwise they’re pretty much the same, each including:

All sounds pretty great huh? “But I just bought a new Macbook and it only has USB-C ports, what do I do?”

Well, Audioquest have you covered, no matter what platform you are using or what model..

Both phone makers and laptop makers have recently all decided they don’t like ports. USB, headphone jacks, you name it: they’re getting rid of it.

All of the Audioquest Dragonfly DAC’s are engineered to plug directly into standard USB ports as they are still the most common port type found universally on laptops and desktop computers. 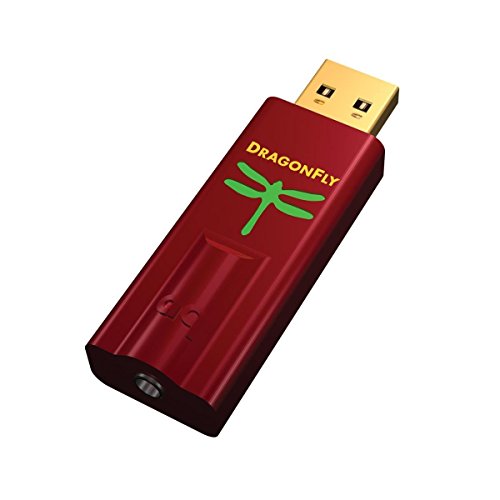 This bundle comes with both the legendary Dragonfly Red/Black and an Apple MFi-approved lightning-to-USB adapter so you can use your DAC to augment your music directly from your new iPhone or other lightning-port iOS device. 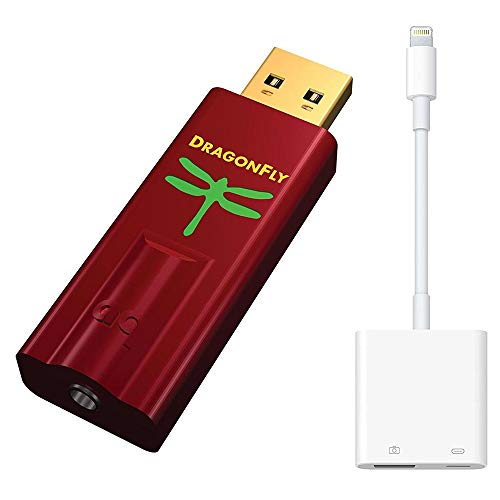 This bundle is similar to the above except that it is bundled with the more versatile lightning to USB 3 camera adapter. With this adapter you can listen to your audio and charge your Apple device at the same time.

For purely mobile use, that is if you only need a DAC for your iPhone, then we might be more inclined to get the FiiO i1 simply because it was engineered specifically for mobile phones and is much more budget friendly. However for laptop use, there’s not doubt that AudioQuest is the winner.

Ultimately, these little Dragonfly DACs are probably some of the most travel-friendly, compact, and POTENT audiophile accessories on the market.

With their smart form factor combined with solid reputation amongst audio lovers they truly are some of the best bang-for-buck investments a mobile music lover can make.

END_OF_DOCUMENT_TOKEN_TO_BE_REPLACED